Safeguarding the structural integrity of buildings of all sizes and purposes will be a crucial endeavor for all industries and sectors in the coming years. As extreme weather conditions continue to increase, so too does the risk of damage to these structures.

Unfortunately, all too often when a disaster strikes, it can be the end of the line for many businesses. According to data gathered from the Insurance Information Institute, following a natural or man-made disaster, roughly 40 percent of businesses remain closed permanently, USA Today reported. As the rise of extreme weather conditions continue unabated, business owners will face more risks associated with this phenomenon.

This means brokers must be aware of these events so they can better inform their existing and potential clients of the risks likely to impact their businesses over the coming years. Unfortunately, according to several different organizations that track the relevant data, extreme weather patterns are only expected to increase. After all, a business can only survive and thrive if its owner is aware of its weaknesses and prepares accordingly.

Increase in extreme weather
While certain weather patterns such as El Nino contribute to an increase in extreme conditions, these are usually isolated and periodic events that scientists can typically track and predict with some regularity. However, as average global temperatures continue to rise, so too does the incident of extreme weather patterns as a whole. According to a wide variety of sources, radical weather formations have been increasing dramatically over the past few years, and many experts are forecasting it to only get worse.

As noted by the National Wildlife Federation, while major weather-related power outages ranged between five and 20 during the mid-1990s, this number has surged to between 50 and 100 during the past decade. Further, 2015 was the hottest year on record with the global average temperature surpassing all data since record keeping began in 1880, and December 2015 reaching a level not seen in the 136-year history, according to the National Centers for Environmental Information. For the continental U.S., it was the second-warmest year on record, representing the 19th consecutive year the average temperature surpassed the 20th century average. According to the National Center for Atmospheric Research, the 2015 U.S. Climate Extremes Index spiked 70 percent higher than its 106-year average, and ranked as the fourth biggest annual climate extreme.

“The increase in natural disasters has the potential to wreak havoc on businesses across the country.”

With this rise in the amount and frequency of extreme weather, business owners will no doubt need to prepare for the unfortunate calamity these forecasts bring with them. In some areas, higher temperatures cause more moisture to stay in the atmosphere, which is then transferred into rainstorms and other precipitation. While in other areas, it can lead to droughts and ultimately a rise in wildfires. All of these disasters have the potential to wreak havoc on businesses across the country.

Mitigating the risks
The lingering effects of these disasters end up costing a considerable amount of money. According to Insurance Journal, Steve Ellis, vice president of Taxpayers for Common Sense noted how extreme weather conditions are causing recovery costs to skyrocket.

“Since the 1980s, the annual number of disasters with a price tag exceeding $1 billion has nearly tripled, from less than three to more than eight a year,” said Ellis. “Planning and taking steps to address these inevitable disasters cuts long-term costs, reduces impacts and ensures states and communities can more quickly rebound from losses. Rather than continue to write big checks post-disaster, we as a nation must invest in ourselves to become less vulnerable.”

These threats will ultimately create a great risk for extreme heat, drought, wildfires, storms and flooding. To combat these threats, business owners must invest before a disaster strikes, both to mitigate and prevent loss. However, no matter how much business owners plan and invest in preventing damage caused by extreme weather, they will still incur losses. That’s why it pays to have the right type of insurance coverages in place.

Brokers who partner with McGowan Risk Specialists gain access to uniquely tailored property programs that incorporate multiple named insureds on a layered loss limit program. With a wide variety of eligible classes and coverages for AOP and wind, wind only, wind deductible buybacks and more, business owners will be able to rest easy when they think McGowan. 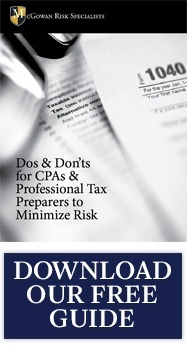